Lynchburg, VA offers some stunning examples of historic architecture. At various times in its history, influential people built Victorian and Georgian residences here and entrepreneurs during the years before and after the Civil War built factories and warehouses that are mainstays of Lynchburg’s Downtown. Many of these buildings are still in use today, converted into museums, restaurants, shops, and residences with stunning views. Architecture buffs can tour our walkable Downtown and seven historic districts to learn more about the architectural marvels of Lynchburg for a fantastic weekend trip.

The first thing you’ll want to do upon arriving in town is check into your hotel. But if you’re here to take in the beauty of Lynchburg’s historic infrastructure, you’ll want to stay in a hotel that is an architectural wonder in and of itself!

The Craddock Terry Hotel, anchoring the Lower Bluffwalk and overlooking the James River, is a Downtown Lynchburg centerpiece that was once a highly productive shoe factory. The best part about this hotel is that it stays true to its roots with most of its interior design looking much the same now as it did during its manufacturing heyday.  We’re talking exposed pipes, stone and brick walls, incredibly high ceilings, and shoe-themed decor.  The hotel is pet-friendly, with their mascot, Penny Loafer, ready to greet you at the door.

If you want to stay in one of our historic districts close to nearby landmarks like Point of Honor, the Blackwater Creek Trail and Downtown, try the Carriage House Inn Bed & Breakfast. This historic home in the Daniel’s Hill Historic District was converted into a bed and breakfast, and its proprietors have maintained much of its rich 19th century architecture and themes, from large, original fireplaces to antique-style furniture to intricate wood and stonework.

If your tastes are a little more modern, with a desire for elegance, reserve a room at The Virginian Hotel. Originally opened in 1913, it was Lynchburg’s premier Downtown hotel.  Its architectural majesty is complete with 30-foot vaulted ceilings, arched windows, curved skylight, marble staircase and wrought iron railings.  With painstaking renovations and attention to every detail, this building has been restored to its original glory—including finding and sourcing marble for the grand ballroom from the original quarry!

After you’ve settled in, pick up dinner from one of our many fine dining restaurants in the Downtown area. Whether you want pizza, seafood, burgers, Asian cuisine or other, we’ve got you covered with a wide variety of options.

Day 2: Step Back In Time

The first piece of architecture on your tour begins a few miles up the road at Poplar Forest, Thomas Jefferson’s famous Bedford County retreat home. This unique octagonal National Historic Landmark was designed and built by America’s third president for his personal use. Hear how the home was rediscovered and appreciated as one of his most important works, and uncover the details of Jefferson’s life, family and the enslaved people who lived and worked there.

On your way back to Downtown, stop at the Anne Spencer House Museum & Garden. Set in the historically Black Pierce Street neighborhood, this famous African American poet and civil rights activist’s home was built in 1903. Constructed in an elegant Queen Anne style, this shingle-sided, two-story residence has a welcoming front porch and a roof with a slightly projecting gable. But perhaps even more impressive is what is found behind the house, in the famous Anne Spencer Garden. Take in the beauty of nature that so deeply inspired Spencer to write, and observe the ingenuity that her husband built into her small brick-and-stone writing retreat, Edankraal. The garden is open dawn to dusk and the house is open by appointment.

Head downtown for a late lunch, perhaps at Waterstone Pizza, part of the same historic shoe factory as Craddock Terry Hotel, or at Depot Grille, an American restaurant located in the part of the old Lynchburg railroad station that is still standing.

Once you’ve satisfied your hunger, the rest of Downtown Lynchburg’s architecture awaits you. Stop in the Visitor’s Center, a converted 1940’s era gas station, where you can pick up the Architectural Walking Tour and the Historic District Walking Tour brochures to complete during your stay.

The Miller-Claytor House is the next destination on our itinerary. Believed to be the oldest surviving original house in Lynchburg, this residence was built in 1791 by John Miller, a tavern keeper, and later purchased by Samuel Claytor, a tobacco merchant and Senator, in 1835. It still retains much of its colonial architectural style, with a high-peaked roof, two brick fireplaces and wood-slat siding. It also has a traditional colonial garden that’s worth an admiring walk-through. Garden open dawn to dusk and home by appointment.

After a full day of touring, get another delicious sample of Lynchburg’s eclectic cuisine, then head back to your hotel for a well-deserved rest.

Day 3: There’s More Where Those Came From

After breakfast, continue your architectural touring at Point of Honor, a Federal-style mansion that Dr. George Cabell, Patrick Henry’s personal physician, built for his family in 1815. While it has passed through multiple hands in its long history, it was finally given to the City of Lynchburg in 1928, and in 1976 was developed into a museum. The home is characterized by a symmetrical and octagonal construction, keystone lintels, louvered shutters and a one-story porch.

A tour of the home will give a perspective of life during the early 1800’s, including the practice of medicine of the time, the Cabell family and the enslaved people who lived and worked for the benefit of the family.

Then take a walk over to the Lynchburg Museum, housed in the old, Greek-style courthouse at the top of Monument Terrace. Once you’ve discovered more about Lynchburg history from the colonization period up to present day, stroll down Monument Terrace, a beautiful memorial to soldiers throughout American history. Complete your Lynchburg architectural history visit with trips to a select few of the locations shown on the walking tour brochures you picked up previously, and then head home to tell your friends and family about what you learned! 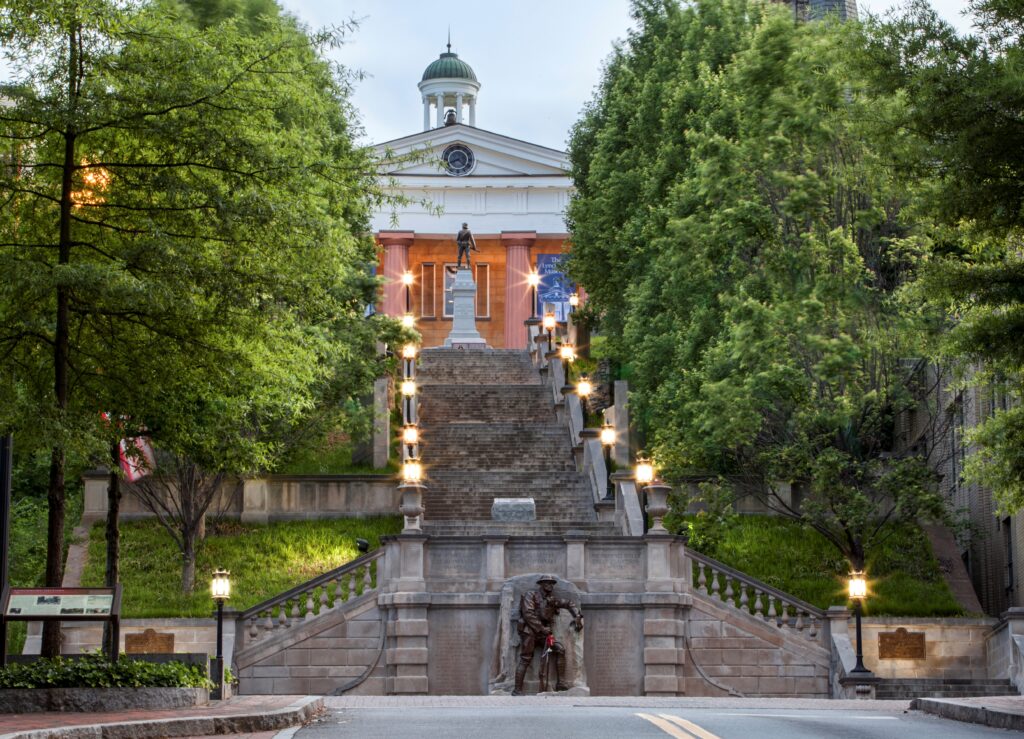